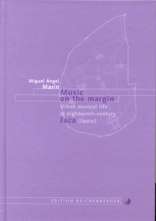 This book studies the musical life of Jaca, a small town in north-eastern Spain, during the eighteenth century. The new perspective presented here reveals that a mutually influential relationship existed between local institutions and repertories and the urban framework in which they operated. Analysis of how this relationship was shaped in a particular place during a particular period forms the basis of this study. In addition, the book aims to contribute to the placing of less important towns on the musicological map, hitherto dominated by the larger cities. Research to date has generally focussed on ?significant? phenomena that have taken place in ?centres? while the role of music in smaller, provincial towns has remained little explored. Taking Jaca as the locus of study, rather than the object of study, comparisons are consistently drawn to uncover similarities between situations that are close in space and time as well as to illustrate divergences from the mainstream. Thus the conclusions presented here may well be relevant for other similar Spanish and European urban settlements.

Music on the margin is not a history of musical ?heroes?, but of music in the lives of ordinary people. What is implicit here is an attempt to rescue their ?voice? in order to include it in the polyphonic discourse of current music history. Even though this voice is as yet a barely perceptible whisper, it nevertheless represents the musical experience of a large part of the European population of that time.

Introduction: Towards an "urban musicology". Why Jaca?

Part I. Institutions and musicians
1. Jaca and its "soundscape"
-Townscape: space, institutions and inhabitants
-Soundscape: noise and music
-Towards the ecclesiastical capilla de música in Spain
2. The Cathedral
-The ruling body: the chapter
-The performing groups: the cathedral musicians
-Family, colleagues and friends: the social context of cathedral musicians
-The mobility of church musicians
-Conclusions
3. The religious orders
-The Benedictine convent
-The Dominicans, Carmelites and Franciscans
-The Scolopians and their theatrical activities
-Collaboration and interdependency
4. Other urban institutions
-Confraternities
-The citadel
5. Music and town
-Feasts in urban spaces
-A local calendar of feasts