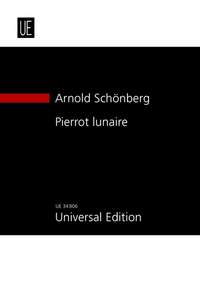 Pierrot lunaire marks the high point of Schoenberg's expressionistic period, the essence of which he described as renouncing tonal centers and systematic relationships, replacing them with the twelve-tone method he was later to develop, with its dodecaphonic principles. Dethroning tonality and "emancipating the dissonance" led to a radical change in his understanding of form and the intensity of musical expression beginning in 1907/1908: "And I am unconditionally approaching a new kind of expression - I can sense it. The sounds now are virtually becoming a bestially direct expression of sensual and intellectual feelings - almost as if everything had been directly propagated." (Diary entry, March 1912.)