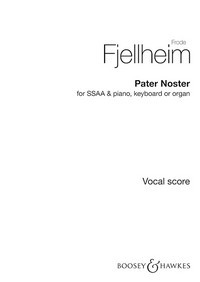 Pater Noster was originally part of Fjellheim?s album Aejlies Gaaltije - The Sacred Source, released in 2004. This SSAA choral version was created for the choir Cantus for their album Northern Lights (2017). The idea behind Aejlies Gaaltije - The Sacred Source was to combine parts of the traditional Latin Mass with elements of the Sami yoik tradition, other Norwegian folk music and the finnish music tradition.