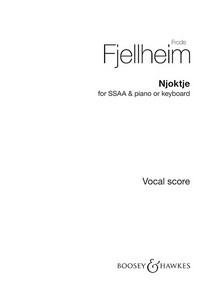 ?Njoktje? is the South Sámi word for a swan and this music is based on an old yoik (a traditional Sámi form of song) which creates and ?audio image? of this beautiful bird, rather than simply describing it. In this piece, which was recorded by Cantus on their album Northern Lights, elements from the original yoik have been used together with the composer?s own experience of the bird, as well as his own musical language. An independent, four-part yoik ostinato in the alto 2 part underpins much of this work, and that, combined with the flowing melodies and close harmonies, creates a unique and very attractive soundscape.Fjellheim?s distinctive and approachable musical language, which many will recognise from the use of his music at the opening of Disney?s Frozen, will appeal to both singers and audience.