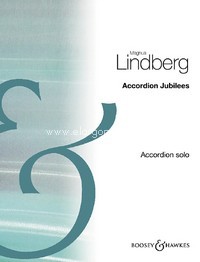 Virtuoso transcription for accordion of Lindberg?s cycle of six ?Jubilees? for piano solo. Jubilee I was composed as a birthday present for Pierre Boulez in 2000, and the cycle was completed the same year. The composer remarks that it was a challenging assignment as it was the first of his works to be made up of short movements forming a harmonious entity. The suite bears a distant relationship to Debussy?s and Chopin?s studies in that they too operate on clearly defined textures. The accordion transcription was first performed by Janne Valkeajoki in 2018 in the Camerata Hall, Helsinki Music Centre, Finland, at the 40th anniversary concert of the accordion class of the Sibelius Academy.