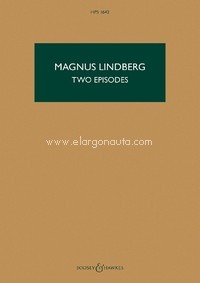 This work was commissioned by the London Philharmonic Orchestra as a companion piece to Beethoven?s Symphony No. 9. As Martin Anderson explains, "Magnus Lindberg?s Two Episodes attempt - perhaps for the first time in the history of music - to mirror a procedure one occasionally finds in architecture: it is the equivalent of adding a modern portico to some old and revered building." Lindberg has a particular fondness for Beethoven: "If I was really pressed to choose just one composer from the classical canon it would have to be Beethoven, because he stands out as an example of what it is to be a contemporary composer - just as much as figures like Iannis Xenakis in my own lifetime ? Two Episodes falls naturally into two distinct sections: one is linked to the massive impact of Beethoven?s first movement, with its immense tutti writing, full of bold sounds and energy, while the second is closer to the beauty of the slow movement and acts as a bridge towards the open fifth A and E and its D minor destination [the key of Beethoven?s Ninth] ? Rather than incorporate quotations, I?ve embedded a number of Beethovenian allusions, so there are clear aural links, and the orchestration matches the symphony, so it has a ?period? colour, without the harp, piano and exotic percussion that feature in many of my works." The work incorporates alternative endings: the first allows Two Episodes to lead directly into Beethoven?s Symphony No. 9 without a break, as originally intended. The second ending comprises a full close, allowing for separate performance of the two works.