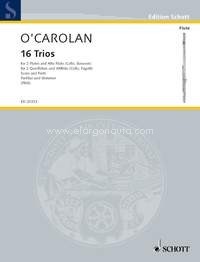 Turlough O?Carolan (1670-1738) is regarded as one of the last great harp-players of Ireland and seems to be surrounded by an almost mystical aura. Numerous anecdotes exist which testify to a strong personality and a tremendous musical talent as well as enormous self-confidence. Unlike any other, he knew how to combine old Irish music with Italian Baroque music, creating numerous compositions about 200 of which have survived. 16 of them have been chosen and arranged by Patrick Pföß for the delightful instrumentation of two flutes and alto flute. In case there is no alto flute available, a separate violoncello part is available instead.