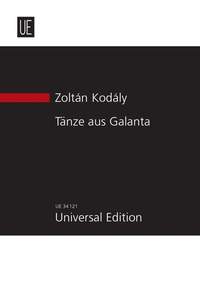 "Galánta is a small Hungarian market-town known to the travellers from Vienna to Budapest. The composer has passed there seven years of his childhood. There existed at that time a famous Gipsy-band which has disappeared in the meantime. Their music was the first 'orchestral sonority' which came to the ear of the child. The forbears of these gipsies were known already more than hundred years ago. About 1800 some books of Hungarian dances were published in Vienna, one of which contained music 'after several gipsies from Galantha'. They have preserved the old Hungarian tradition. In order to continue it the composer has taken his principal subjects from these ancient editions." (Zoltán Kodály, 1934)