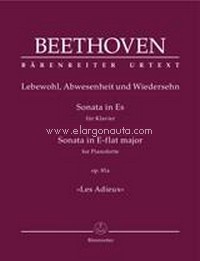 Composed in 1809 10, Beethoven's Sonata op. 81a expresses his very personal feelings. He titled its three movements  Das Lebewohl (The Farewell),  Die Abwesenheit (The Absence) and  Das Wiedersehn (The Return) in reference to the hasty departure of his good friend and patron Archduke Rudolph of Austria who fled Vienna with the imperial family on 4 May 1809 to escape Napoleon's approaching troops. Beethoven referred to op. 81a as a  characteristic sonata , not in the sense that it had an underlying programme, but because it lent musical expression to his feelings. He reacted angrily when his publisher printed French translations of its title and movement headings. Thishowever did not prevent op. 81a from becoming widely known by its French name  Les Adieux .Jonathan Del Mar, worldwide authority for Beethoven's instrumental music, offers a reliable musical text on the basis of the most recent research. The editorial principles are clearly laid out in the Critical Commentary. The elegant engraving meets the performer s needs. Specifically, in the Bärenreiter Urtext edition there is no longer disruptive page turning between the slow second movement and the  attacca subito of the following Vivacissimamente. The publication is rounded off by helpful comments on important issues of historical performance practice and by an informative Introduction.