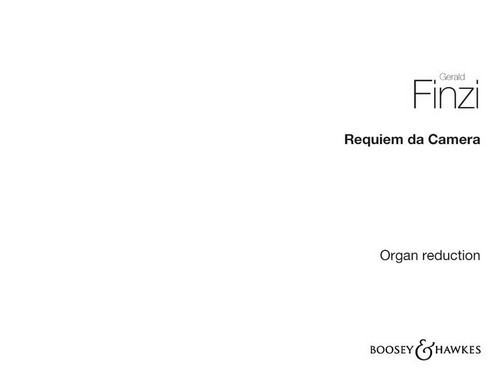 Requiem da Camera, for baritone solo, small chorus (or SATB soli) and chamber orchestra, Organ reduction for use instead of orchestral accompaniment

This organ reduction is intended to use instead of the original orchestral accompaniment; it is compatible with new edition of Requiem da Camera by Christian Alexander (BH 12681). The organ reduction was done by Francis Jackson, doyen of English cathedral organists and titulaire at York Minster for 36 years. Jackson sympathetically recreates the chamber orchestra scoring for a three-manual organ. Ingeniously, the manual couplings (II to III, II and III to I) are unaltered throughout, with pedal coupled to manuals as appropriate. Detailed registrations are not indicated as these are best left to the performer, taking into account the unique circumstances of the particular instrument, size of choir and acoustic setting at each individual performance.The user-friendly landscape score includes at least one principal vocal line cued throughout, and a cappella choral passages are reproduced in full.Requiem da Camera was Finzi?s first extended work; only the instrumental prelude was performed during his lifetime. The other three movements are settings of poems by John Masefield, Thomas Hardy and Wilfrid Wilson Gibson. Scored for baritone solo, small chorus (or SATB soli) and chamber orchestra, the wellspring of the Requiem?s composition was the death, during active service in 1918, of Finzi?s composition teacher, Ernest Farrar. The work may also be viewed as a metaphor - the permanence of the land, and a centuries-old pattern of rural life following the rhythm of the turning seasons, contrasted with the violent havoc and destructive dislocation wrought by war. A reflective and poignant work particularly suitable for performances commemorating the tragedy of World War I.