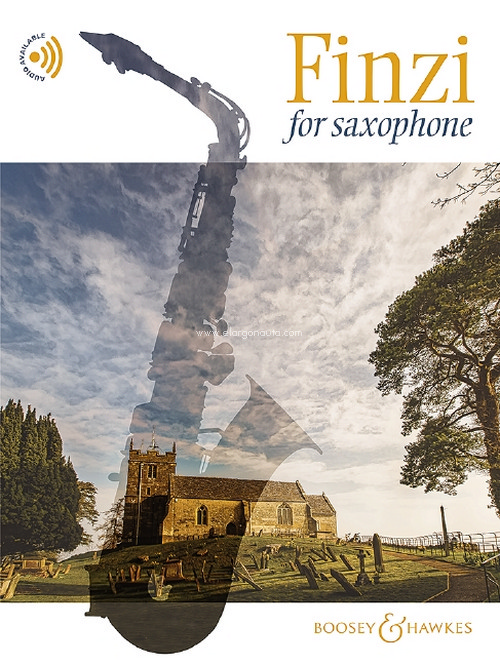 Finzi for alto saxophone and piano

Gerald Finzi (1901-1956) is one of the most popular 20th century British composers, renowned for the lyricism of his work. He was born in London, where he spent his early childhood. Following the death of his father, and the outbreak of the First World War, he relocated to Yorkshire and later Gloucestershire where he began to study and compose. Returning to London in 1926, he was introduced to Vaughan Williams, Holst and Bliss, and took up a teaching position at the Royal Academy of Music. Following his marriage to Joy Black, he moved away from the city, firstly to Berkshire and then to Wiltshire, where he enjoyed writing surrounded by the beauty of the English countryside. He supported and encouraged the work of developing amateur musicians, particularly through his wartime formation of the Newbury String Players. His search for new music for this group led him to produce celebrated scholarly editions of English music of the eighteenth century. This album transcribes works originally written for other instruments or accompanied voice, giving the saxophonist the opportunity to explore this most expressive English repertoire. It features highlights from Finzi?s vocal writing, including Rollicum-rorum from Earth and air and rain (a song cycle formed of settings of Thomas Hardy?s poetry), The Salutation and Wonder from Dies natalis (a song cycle with settings of texts by Thomas Traherne), Who is Silvia? and Come away, come away, death from Let us garlands bring (a set of poems by Shakespeare), Amen from Lo, the full, final sacrifice and Since we loved - the final song he wrote before his death in 1956. There are also selections from the composer?s instrumental writing, including themes from the Clarinet Concerto and the Cello Concerto, Eclogue, and Romance and Carol from Five Bagatelles. Audio resoureces are avaialbe for streaming or downloading.

Biography
Preface - Amen from Lo, the full, final sacrifice, op 26 - Carol from Five Bagatelles, op 23 - Cello concerto, op. 40: theme form the second movement - Clarinet concerto, op 31: theme from the third movement - Come away, come away, death from Let us garlands bring, op 18 - Eclogue for piano and strings, op 10: theme - Rollicum-rorum from Earth and air and rai, op 15 - Romance from Five Bagatelles, op 23 - The Salutation from Dies natalis, op 8 - Since we loved from Oh fair to see, op 13b - Who is Silvia? from Let us garlands bring, op 18 - Wonder from Dies natalis, op 8