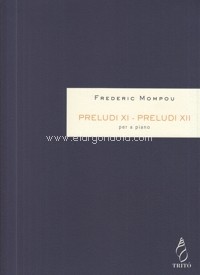 Among the works of Frederic Mompou (1893-1987) we find series of pieces, such as Cançons i Danses or the Preludis for piano, which he composed over the course of many years and which remained a constant in his creative mind. Each of these pieces is an autonomous work, and their grouping into series has more to do with their sharing a single generic title than with any formally unitary conception as a whole.

Of the twelve preludes that Mompou composed only ten were ever published, divided between two books: the first (1930) included Preludis I, II, III and IV, which has written in the period 1927 to 1928; the second (1952) included Preludis V, VI, VIII, IX and X, written between 1930 and 1944, and VII "subtitled Palmier d'étoiles and of a nature quite distinct from the rest" written in 1951. The two other preludes from the series, although they were performed in concert and recorded during the composer's lifetime, remained unpublished.