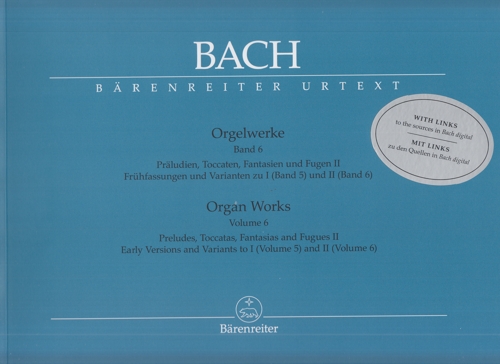 Any complete scholarly critical edition of the works of Johann Sebastian Bach must incorporate new research findings in the interest of scholars and performers alike. Now all of Bärenreiter?s new performing editions of Bach?s organ works are being revised to reflect the current state of scholarship and to convey maximum fidelity to the sources by being linked to "Bach digital".The present volume is an updated edition of Series IV, Volume 6 of the "New Bach Edition" (NBA), prepared by Dietrich Kilian in 1964. The discovery of new sources and a reassessment of existing handwritten copies have brought about changes to the contents of the volume, which now includes the "Fantasia in C minor" (BWV 1121), the "Fantasia in G major" (BWV 571), the "Fugue in G major" (BWV 577) and the C major version of the "Toccata and Fugue in E major" (BWV 566). On the other hand, the "Prelude in G major" (BWV 568) as well as the alternative versions of the "Fugue in C minor" (BWV 574a) and the "Prelude in A major" (BWV 536a) have been discarded as presumably spurious.
Besides the new compilation and corrections of the musical text, the volume also contains a detailed Foreword by Peter Wollny with observations on each work and the extant sources. Page turns have been re-examined and improved.In collaboration with the Bach Archive Leipzig and its "Bach" digital database, links are provided to all the major sources. The website http://links.baerenreiter.com [1] enables readers to access the relevant page in the source simply and conveniently via short URLs. The links stored there are examined for their validity on a regular basis.
Links:------[1] http://links.baerenreiter.com