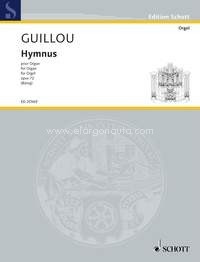 Jean Guillou's 'Hymnus' Op. 72 was written in memory of Father Jaap Keulen, a friend of the composer. Hymns are traditional, chordal, solemn chants. The piece has adopted this style by consisting mainly of chordal movement, except for a few melodious passages. New features are the refined colourful harmony and the constantly changing energetic rhythms. The solemn ceremonial expression can be heard especially at the beginning and at the end in heavy sounds. The world premiere of the work was performed by Winfried Bönig at the Cathedral of Cologne on 16 June 2009.