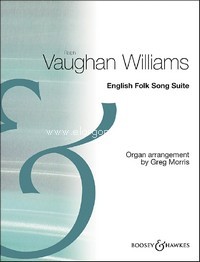 A major addition to the repertoire of transcriptions for organ, the whole suite or any one of the movements will delight performers and audiences alike. Vaughan Williams?s original score for military band of 1923 (orchestrated by Gordon Jacob the following year) was a milestone in the introduction of English folk song to the classical repertory which both he and his friend Holst championed. Over its three contrasting movements (two marches separated by an intermezzo) no fewer than nine folk songs are presented, in both lively and emotive style. Greg Morris, organist at London?s Temple Church, has deftly arranged the suite, providing generic registration suggestions for a romantic instrument, but in the hands of imaginative players the score will readily transfer to organs of most styles and eras.