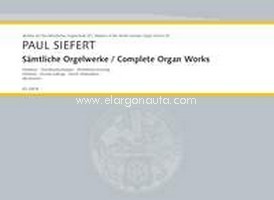 The composer and organist Paul Siefert, baptized in Gdansk on 28 June 1586 and died there on 6 May 1666, belongs to the 'North German organ school'. Thanks to a grant of the town council of Gdansk, Siefert spent the years from 1607 until probably late 1610 studying in Amsterdam where he got important ideas and suggestions as a pupil of Sweelinck. After his return he became deputy organist in Gdansk. From 1611 to 1616 he worked as an organist first at the church in the old town of Königsberg, then at the Warsaw court orchestra. On 23 September 1623 he was appointed organist at the Marienkirche of Gdansk in succession to Michael Weyda where he worked until the end of his life. This edition of his organ works contains 13 fantasias, two chorale preludes and a motet as well as a detailed description of the work in the preface and in the critical report.