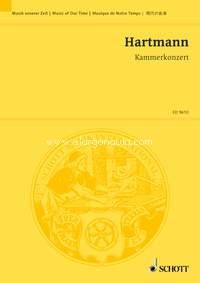 This Concerto was inspired and written in honour of Zoltán Kodály. Hartmann was inspired to write a piece of music characterised by a Hungarian flavour, as much in the cadenza-like free passages reminiscent of gypsy music in the third movement Fantasie as in the vivacious dance variations of the second movement.