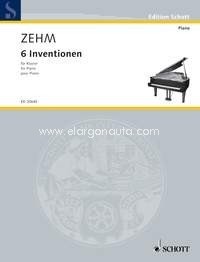 The compositions of Friedrich Zehm (1923-2007) are characterized by the desire for clarity, conciseness and general comprehensibility. His freely tonal works are influenced by elements from various epochs while having a close connection to classical modern music. Formed from distinct rhythms and refined counterpoint, Zehm develops his very own tonal language, quite often accompanied by a wink. Although Zehm's music is unmistakably in the contemporary style due to its freely tonal structure, it is never radical and incomprehensible, thus taking away the player's inhibitions about modern classicism. In his 6 Inventionen, Zehm takes up traditional forms and fills them with extended musical material by expanding the tonal framework and using lively rhythms and concise themes in a complex manner. Inventionen is aimed at the advanced piano pupil who is interested in modern music - an excellent introduction to classical modern music!