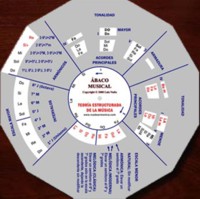 The Musical Abacus integrates the main concepts in Music Theory, relating them in a logical and ordered way.For beginners, simple to use, for those without prior knowledge to reading music. It consists of two rotating discs, one being card and the other plastic. Both discs are 12-sided polygons (or dodecagons). This is due to the fact that there are 12 different musical notes and, therefore, 12 major keys, 12 minor keys, 12 major chords, 12 minor chords, etc.

In each of its 12 possible positions we obtain:

All these concepts are basic in any musical style, such as: classical music, modern music, jazz, latin music, etc. The included extra sheet explains how the harmonics establish the consonant intervals and then the major and minor chords, from which the scales and keys are finally formed.