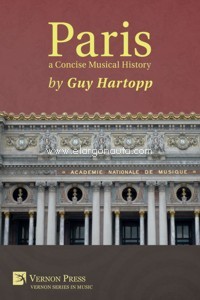 Paris, the City of Light, is one of the most romantic cities in the world. The millions of visitors which flock to the French capital every year follow in the footsteps of countless artists, writers and composers who for centuries have been drawn to this magnificent city. Some composers, Chopin and Rossini among them, found success and contentment, and remained in Paris for the rest of their lives. But for others, Paris brought nothing but disappointment and disillusionment. Mozart, who came to Paris as a 22-year-old seeking a permanent position, was so bitter about the cavalier manner in which he was treated that he professed an aversion to all things French until the end of his days. Wagner was so upset by his treatment here that he once described Paris as "a pit into which the spirit of the nation has subsided." And yet he was drawn back to the city time and again.

This book charts the musical history of Paris. It discusses the composer and musicians, both French and foreign, who were drawn here and the impact they made on the world of music, on this great city, and vice versa. It includes a wealth of biographical details, including where the artists lived and, where relevant, where they died and are buried. It also draws from and points to suitable scholarly literature, making it an accessible introduction to students of the musical history of Paris.

The book also describes another feature which, if it did not enrich, most certainly enlivened Parisian musical life: The full-scale musical riot. The most notorious of these took place at the Theatre des Champs Elysées in 1913 at the premiere of Stravinsky?s ballet Le sacre du printemps. Less physical, but no less vociferous, was the reception accorded to Wagner?s Tannhäuser at the Opéra in 1860. Other composers who incurred the displeasure of Parisian audiences included Satie, Varese and Xenakis. These riots were not half-hearted affairs; police involvement was required and hospital casualty departments were kept busy.

There are also chapters which discuss the musical history of the many theatres of Paris and the churches which played such an important part in the city?s musical past. The text is clear and accessible in order to appeal to both students and the general reader.

1 The opera companies of Paris

18 The concert halls and opera houses of Paris

19 The churches of Paris and their musical ssociations

20 Colleges and schools of music

22 The cemeteries of Paris

Appendix A Composers? principal residences
Appendix B Theatres used by the opera companies
Appendix C Getting about in Paris