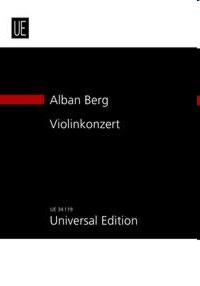 Study score - Based on the text of the Critical Edition - for violin and orchestra
Editor: Jarman, Douglas

In February 1935 Alban Berg was approached by the American violinist Louis Krasner with a request to write a violin concerto. Although reluctant to stop working on Lulu, Berg's financial position made the refusal of such a commission almost impossible. Having jotted down some preliminary ideas for the piece in mid-March, Berg proposed to devote the summer, which he spent at this house near Velden in Carinthia, composing the Concerto. On 22 April, a few days before Berg left Vienna for Velden, a tragedy occurred that would determine the final shape of the Concerto. Manon Gropius, the daughter of Alma Mahler and Walter Gropius, died of poliomyelitis. Berg wrote to Alma Mahler that he intended to dedicate his work dem Andenken eines Engels [to the memory of an angel], in memory of Manon. The Concerto was written at the Waldhaus in Carinthia between May and August 1935. (Douglas Jarman, 1996)