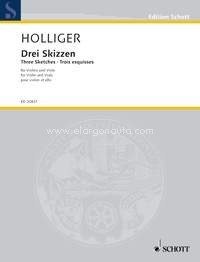 Three Sketches, for Violin and Viola (Viola in the scordatura as in Mozart's Sinfonia concertante KV 364), score and parts

In the Mozart Year, Thomas Zehetmair and Ruth Kilius asked Heinz Holliger for a striking encore piece for violin and viola for Mozart's Sinfonia concertante which had often been performed by them under his direction. The outcome, however, is an independent three-part cycle consisting of quite different pieces. The first has been woven exclusively out of floating harmonics, the second is a wild whirling dance, while the third condenses into a six-part chorale in which each player has to sing a third voice in addition to playing double stops on his string instrument.