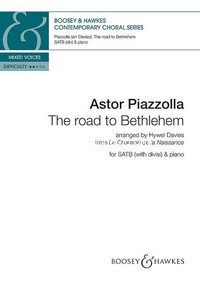 This Christmas carol, originally in French and entitled ?La Chanson de la Naissance?, first appeared in a comedy theatre show called Famille d?Artistes in 1989. Piazzolla is best known for his development of Tango Nuevo through his many works that cross the boundaries between tango, jazz and classical music. This arrangement, which is true to his original tune and harmonic scheme, shows many of these traits and uses a new English text. The simple, catchy tune and chorus is passed around all sections of the choir - including an unaccompanied section - building to the choral tutti in the last verse.