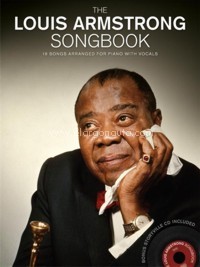 A 20th century jazz prodigy with a supreme talent for improvisation, Louis Armstrong would become a successful popular entertainer in later years. He could still revisit the dazzling instrumental performances of his youth but in time ?Satchmo? became even more famous for his gravelly vocals and larger-than-life guest performances in TV shows and musical films.

Scott Fitzgerald famously wrote that there were no second acts in American lives but Armstrong proved him wrong. With his reputation secure, the pioneering jazzman happily tackled the wide range of popular songs reflected in this excellent collection.

Armstrong would sing anything. He never gave less than a heartfelt vocal performance and people loved him for it. This unique collection celebrates some of his best and most famous songs.

The accompanying audio CD features a selection of Armstrong?s Storyville recordings made in Europe and offers a further insight into the range and versatility of this unique musician and performer.