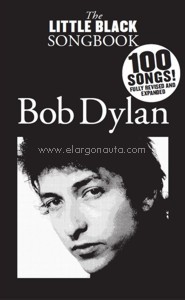 This Bob Dylan Little Black Songbook is a surprisingly compact pocket-sized book that has been fully revised and updated to include a massive selection of 100 songs by possibly the greatest singer-songwriter of all time.

Bob Dylan has spent his life creating an enormous oeuvre of songs created around chords. He has used these as a powerful backing for his poetic lyricism. With this Little Black Songbook, 100 Dylan classics are available for you to play and sing, accurately transcribed exactly how the man himself wrote them. Some of his greatest songs are featured here, from all years of the Dylan canon, such as Blowin' In The Wind, Don't Think Twice It's Alright, Mr. Tambourine Man and the incomparable Like A Rolling Stone, right up to the present day with Duquesne Whistle.

Many of his songs frequently appear in lists of the best songs ever written, and it's easy to see why. Taking these relatively simple chords, Dylan put them in innovative progressions, wrote interesting lyrics and rousing harmonies to go with them, and quickly became a giant in the folk and rock music scene. This songbook would be ideal for a singer-songwriter, a Dylan fanatic, or just someone who loves great Guitar music, as each and every one of these fantastic songs is just begging to be strummed and sung. Every song comes complete with chord names and full lyrics.

So pick up this huge collection of Bob Dylan chords in the not-so-huge Little Black Songbook and bring the spirit of the '60s into your living room with 100 of these wonderful songs.


All Along The Watchtower
All I Really Want To Do
Ballad Of A Thin Man
Beyond Here Lies Nothin'
Blind Willie Mctell
Brownsville Girl
Blowin' In The Wind
Changing Of The Guards
Chimes Of Freedom
Dark Eyes
Desolation Row
Dignity
Don't Think Twice, It's All Right
Duquesne Whistle
Every Grain Of Sand
Everything Is Broken
Forever Young
Girl From The North Country
Gotta Serve Somebody
A Hard Rain's A-gonna Fall
High Water (For Charley Patton)
I Believe In You
Hurricane
I And I
I Don't Believe You (She Acts Like We Never Have Met)
I Want You
I Pity The Poor Immigrant
I Shall Be Released
I Threw It All Away
Idiot Wind
If Not For You
If You See Her, Say Hello
I'll Be Your Baby Tonight
I'll Keep It With Mine
Is Your Love In Vain?
Isis
It Ain't Me, Babe
It's All Over Now, Baby Blue
It's Alright, Ma (I'm Only Bleeding)
John Wesley Harding
Jokerman
Just Like A Woman
Just Like Tom Thumb's Blues
Knockin' On Heaven's Door
Lay Down Your Weary Tune
Lay, Lady, Lay
Life Is Hard
Like A Rolling Stone
Love Minus Zero, No Limit
Love Sick
Maggie's Farm
Make You Feel My Love
Mama, You Been On My Mind
The Man In Me
Man In The Long Black Coat
Masters Of War
Million Dollar Bash
Mississippi
Most Likely You Go Your Way And I'll Go Mine
Most Of The Time
Mr. Tambourine Man
My Back Pages
Not Dark Yet
Oh, Sister
On A Night Like This
One More Cup Of Coffee (Valley Below)
One Of Us Must Know (Sooner Or Later)
Positively 4th Street
One Too Many Mornings
Quinn The Eskimo (The Mighty Quinn)
Rainy Day Women #12 & 35
Roll On, John
Senor (Tales Of Yankee Power)
Sad-eyed Lady Of The Lowlands
Sara
Series Of Dreams
Simple Twist Of Fate
She Belongs To Me
Shelter From The Storm
Shooting Star
Spanish Harlem Incident
Stuck Inside Of Mobile With The Memphis Blues Again
Subterranean Homesick Blues
The Times They Are A-changin'
Talkin' Bear Mountain Picnic Massacre Blues
Tangled Up In Blue
Tears Of Rage
Things Have Changed
Trying To Get To Heaven
This Wheel's On Fire
Thunder On The Mountain
Tomorrow Is A Long Time
Visions Of Johanna
Watching The River Flow
When The Deal Goes Down
What Good Am I?
When I Paint My Masterpiece
Workingman's Blues #2
You Ain't Goin' Nowhere
You're A Big Girl Now