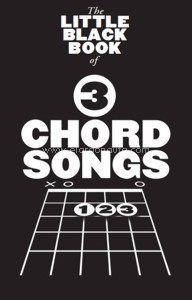 The Little Black Book Of 3 Chord Songs is a pocket-sized collection of over 80 songs, all of which use no more than 3 chords.

You'd be amazed how many of the most popular songs ever written only use three chords. The artists included in this book have hit upon that winning formula and managed to create these great songs from such a small number of chords.

The simplicity of the songs makes them easy to play, fun to listen to and familiar to everyone. This book would be perfect for a busker, a campfire singalong or just singing to yourself in your room - these really are brilliantly versatile songs. It is testament to the brilliance of artists like Kings of Leon, Florence & The Machine and Rod Stewart that they can write such catchy melodies within the constraint of just three chords. The Little Black Book is an ideal chord songbook for a beginner who is keen to play a number of songs with the chords they've learned, or is looking to expand their chord knowledge. Even for more experience players, this book will reinforce your rhythm playing, and it never hurts to know a few crowd-pleasers.

Presented in chord songbook format, each piece in The Little Black Book Of 3 Chord Songs is arranged in the same key as the original recordings, along with chord symbols, Guitar chord boxes and complete lyrics. So for the keen strummer, or the aspiring singer-songwriter, this songbook is an essential addition to your music shelf.