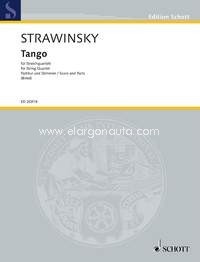 Igor Stravinsky liked to use different stylistic devices or embedded them in his personal musical language: Be it that he took a Gallop by Jacques Offenbach or composed Circus Polka for a Young Elephant or a ragtime. After the outbreak of the Second World War and his final move to the USA in 1939, he was in particular influenced by jazz music. In 1940 the composer wrote a Tango for piano which he arranged for chamber music ensemble in 1953: It is a strictly structured three-part tango on which Stravinsky imposed his harmony, his musical language. Arranged for string quartet by Wolfgang Birtel, the work is a perfect addition to the classical concert repertoire but also an entertaining, yet demanding musical piece for playing chamber music at home.