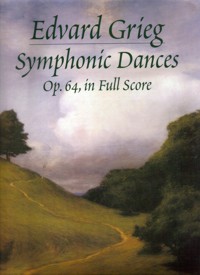 The 1890s were years of relative peace for Grieg, who had been traveling widely: he had recently taken up permanent residence at Troldhaugen, and the music world had begun to confer distinctions and honors on the beloved 53-year-old Norwegian composer. Out of this fertile time was born Grieg's second nationalist period -a fresh exploration of his country's rich treasury of folk music and the birth of his four evocative Symphonic Dances (on Norwegian Themes), Op. 64. Originally composed for piano four-hands, the Dances were later scored for large orchestra, dipping into a rich palette of instrumental colors. They are considered among Grieg's strongest, most mature pieces for orchestra.