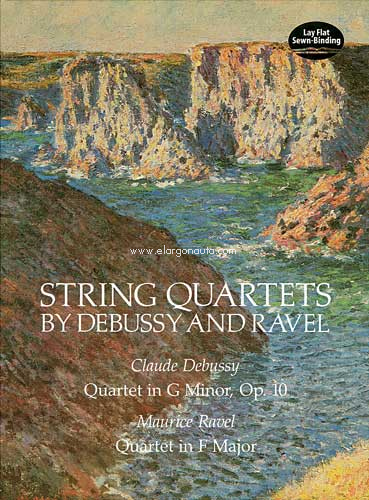 Few composers of the twentieth century have wielded more influence in the musical world than the two "impressionist" masters represented in this volume. Such composers as Webern, Bartók, Varèse, Messiaen and even John Cage owe a debt to Debussy's innovations in harmony, coloring and psychological penetration.
Similarly, Ravel's achievements in pianistic style, sophisticated harmonies and bold experiments with form had a profound effect on both contemporary and later musicians. Each composer wrote only one string quartet, but by virtue of their individuality, unique interpretations of the medium and delicate and subtle beauties, both compositions enjoy a special place in the chamber music repertoire.

This attractive, high-quality volume, based on authoritative French editions, brings both influential masterpieces together in one inexpensive resource. Clearly printed and sturdily bound for long life on the music stand, this book will enable musicians and music lovers to study, compare and delight in two landmarks of the string quartet genre.