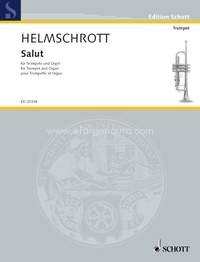 Robert Helmschrott, born in 1938, was professor at the Munich Musikhochschule where he was also headmaster from 1995-2003. He wrote numerous choral and orchestral works and is one of the most important German representatives of contemporary church music. His work 'Salut' is a one-movement concert piece which is rewarding for both players. After a lengthy introduction for solo trumpet, both instruments present fireworks of brilliant idiomatic figurations, yet also make sure that pensive, lyrical tones get their fair share too. A rewarding concert piece of ca. 8 minutes' duration.