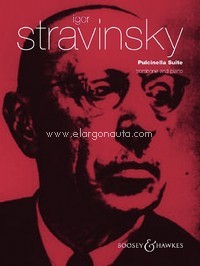 Pulcinella Suite, for trombone and piano

This transcription of Stravinsky?s neoclassical masterpiece is the brainchild of Jonathan Freeman-Attwood, trumpeter, recording producer, writer, University of London Professor and Principal of London?s Royal Academy of Music. Both it and its sister edition for trumpet & piano represent a major addition to the repertory for the respective instruments. The composer?s own violin & cello transcriptions, Suite Italienne, were the precursor for the brass editions, containing a selection of movements, whereas these new publications present the entire suite. In his erudite preface, Freeman-Attwood outlines the importance of the trumpet writing in Stravinsky?s original Pulcinella and its relationship with his other works and with the "gleaming elegance of the solo obbligato trumpet parts which pepper the cantatas and oratorios of Italy and Germany in the early 1700s [?] The trumpet can be heard here echoing the past with its ubiquitous ?baroque? identity, while a fresh ?duo? text implores the player and listener to reflect the work further in a hall of mirrors, ?an hommage?."