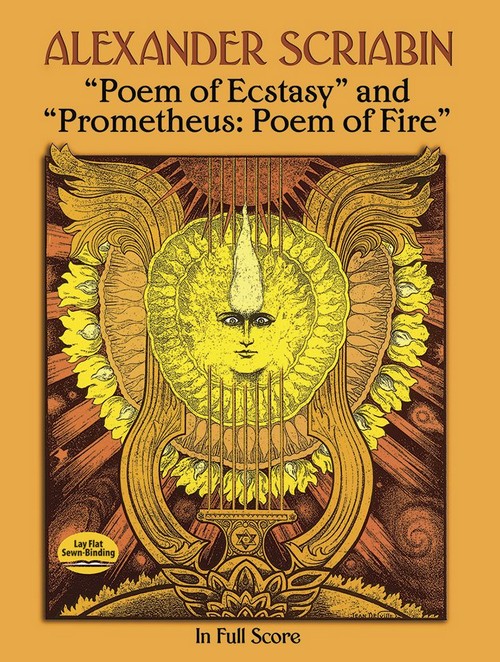 "Poem of Ecstasy" and "Prometheus: Poem of Fire", in Full Score

In the early years of our century, when vital new forces were revolutionising the arts, Russian-born Alexander Scriabin (1872-1915) was one of the visionary pioneers who sought a new musical language. At least a full decade before the advances of Stravinsky and Schoenberg, Scriabin had begun the process of a complete break with all musical conventions. By 1905 he was immersed in a search for a way to express, in sound, the mystical and theosophical ideas obsessed him. Scriabin's last two orchestral works were the products of a virtual delirium of composing. Simultaneously refining his poem called Poem of Ecstasy andcompleting the symphony that grew out of it (and shared its name), Scriabin never forgot the rapture of composing this work about creation and self-fulfilment: 'I gasp for breath, but oh, what bliss! The very meter kindles the meaning…' Prometheus: Poem of Fire - Scriabin's last and most revolutionary symphony - portrays Man's epic journey from the mists of beginning time to a wonderous self-realisation, given the gift of fire and light to make creative vision possible. Massively scored, Prometheus incorporates a 'colour Organ' to bathe the performance space in a vast interplay of coloured lights. For the music professional and every student of composition, orchestration and conducting, both scores are strikingly original and instructive. Equally fascinating are Scriabin's approach to composition, the extraordinary sonorities of his orchestra and his fanciful, often supercharged, performance instructions that replace conventional words for tempo, mood and expression.