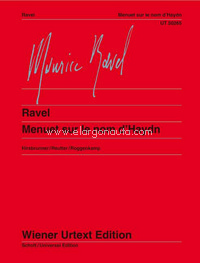 Maurice Ravel wrote his 'Menuet sur le nom d'Haydn' in September 1909 to commemorate the Viennese classicist who died 100 years before on 31 May 1809. The piece was published for the first time in connection with an 'Hommage à Joseph Haydn' in the Revue musicale to which several contemporaries of Ravel contributed as well. The original edition, still in use today, was published shortly after. A comparison with the composer's autograph, currently in France and privately owned, clearly shows the errors and shortcomings of the two first editions so that Ravel's musical intentions can now be published in full measure for the first time in the present new critical edition.