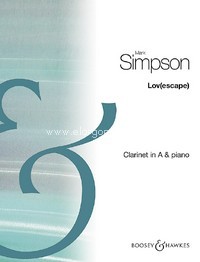 Lov(escape), for clarinet in A and piano

This contemporary work by the clarinettist Mark Simpson was written for his semi-final recital for the BBC Young Musician of the Year competition in 2006, which Simpson went on to win along with the BBC Young Composer of the Year competition in the same year. He writes: "The title Lov(escape) refers to the relationship between the two gestures that characterise the first idea, which can be seen as both connected and separate, hence the formation of the title."