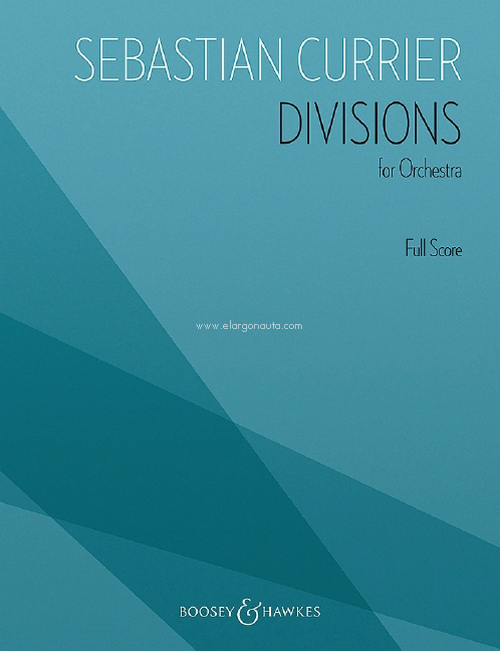 Composer?s note: Divisions was written for Ludovic Morlot and the Seattle Symphony, Andris Nelsons and the Boston Symphony, and the National Orchestra of Belgium, who commissioned the work as part of Music Director Andrey Boreyko?s initiative to commemorate the centennial of World War I. I am honored to be the American representative of this primarily European project to find some form of musical commemorations to the gruesome destructions that gripped Europe a century ago. When I was first approached about commemorating this event, I remember mentioning the project to a friend and he said, well, that was easy, one should just have total silence. And of course, in a way, he was right. That dark time in our collective history is really the antithesis of creative human impulse and it is hard to imagine what place music should have except possibly to once again mourn the dead. But it is one hundred years later and it seemed to me that the piece should have a connection to the present - or even the future - as well as look back to this time of unbridled destruction. My starting point was the rather obvious observation that we humans are a jumble of contradictory impulses; at our best so creative, insightful and altruistic, at our worst so inexplicably short-sighted, destructive and selfish. Divisions embodies this basic contradiction. As it unfolds, the musical material moves from fragmentation and fracture, to wholeness and connectedness. The word ?divisions? points to this process. It first simply refers to the destructive force whereby we humans work against each other instead of together. World War I is certainly an all too familiar instance. ?Divisions? also has its military associations, as in a ?division? of troops. But it also has a much more benign reference in the world of music: a ?division? is an early form of instrumental variations from the 16th century. The term comes from the fact that in each successive variation, as the level of ornamentation increases, there are smaller and smaller note values, so that the beat is further ?divided?. In my piece, the trajectory is from the one meaning of the word to the other. After an opening of disjunction and fracture, the piece finally settles down into a set of simple variations. However, this movement towards wholeness proves ephemeral. The drum beat of war is never far off." -Sebastian Currier-