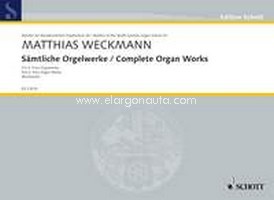 Matthias Weckmann, born in Niederdorla near Mühlhausen (Thuringia) in 1616 and died in Hamburg in 1674, was trained as a musician by Heinrich Schütz in Dresden among others. He worked as an organist in Dresden (Schloßkirche) and Hamburg (St. Jakobi). It is particularly for the Jakobi organ that he wrote his elaborate and virtuoso organ works. Our new edition in the renowned series 'Masters of the North German Organ School' faithfully transfers the works which survived in letter tablature, providing a reliably edited urtext. Volume 1 contains the cantus firmus-based works, 8 authentic verse cycles with 2-7 movements each in which chorale melodies such as 'Es ist das Heil uns kommen her', 'Gelobet seist du, Jesu Christ)' or the 'Magnificat' are varied, as well as a cycle on 'Ach wir armen Sünder' attributed to Weckmann. Volume 2 proves him to a master of concertante organ music, containing 3 works with pedal (Fantasia, Fuga and Praeambulum in D) as well as several moderately difficult works to be played on manuals only (6 toccatas, 5 canzonas). Reliable standard edition of the music by one of the great (North) German organ masters.