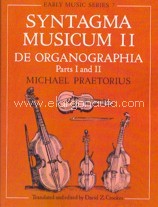 Translated and edited from the edition of 1619 by David Z. Crookes

Over the last dozen or so years the musical landscape has been changed significantly by the revival of early instrumental music. People are now making and playing many Renaissance and early baroque instruments which until recently were not even mentioned in standard dictionaries. Praetorius's De Organographia , first published in 1618, can be called the book behind the revival. While it has long been an essential tool for musicologists, it is now exercising a wider, more popular appeal as the growing multitude of instrument makers and players seek to base its efforts on this documentation Praetorius has provided. De Organographia is beyond argument the most important period book on musical instruments ever to be written. No comparable work gives us the wide range, the clarity of description, and above all the scale drawings that we find in Praetorius.