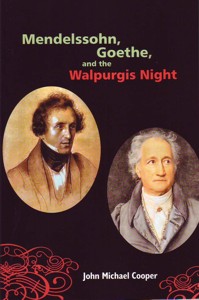 Mendelssohn, Goethe, and the Walpurgis Night

Mendelssohn, Goethe, and the Walpurgis Night addresses tolerance and acceptance in the face of cultural, political, and religious strife. Its point of departure is the Walpurgis Night. The Night, also known as Beltane or May Eve, was supposedly an annual witches' Sabbath that centered around the Brocken, the highest peak of the Harz Mountains.

After exploring how a notoriously pagan celebration came to be named after the Christian missionary St. Walpurgis (ca. 710-79), John Michael Cooper discusses the Night's treatments in several closely interwoven works by Goethe and Mendelssohn. His book situates those works in their immediate personal and professional contexts, as well as among treatments by a wide array of other artists, philosophers, and political thinkers, including Voltaire, Lessing, Shelley, Heine, Delacroix, and Berlioz.

In an age of decisive political and religious conflict, Walpurgis Night became a heathen muse: a source of spiritual inspiration that was neither specifically Christian, nor Jewish, nor Muslim. And Mendelssohn's and Goethe's engagements with it offer new insights into its role in European cultural history, as well as into issues of political, religious, and social identity -- and the relations between cultural groups -- in today's world.