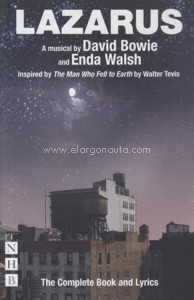 Lazarus: The Complete Book and Lyrics

Thomas Newton came to Earth seeking water for his drought-ridden planet. Years later he's still stranded here, soaked in cheap gin and haunted by a past love. But the arrival of another lost soul brings one last chance of freedom...

Inspired by the book The Man Who Fell to Earth by Walter Tevis and its cult film adaptation starring David Bowie, Lazarus brings the story of Thomas Newton to its devastating conclusion.

Written by Bowie with the playwright Enda Walsh, and incorporating some of Bowie's most iconic songs, Lazarus was first performed at New York Theatre Workshop in 2015, starring Michael C. Hall and directed by Ivo Van Hove. The production transferred to London in 2016.

"This Wayor No Way, You Know I'll Be Free'. Introduction by Enda Walsh