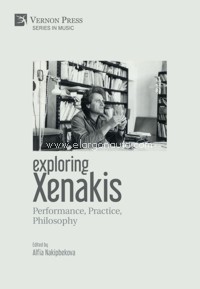 Considered to be one of the most revolutionary composers of the twentieth century, Iannis Xenakis pushed the boundaries of classical music. As a largely self-taught composer, Xenakis drew from his technical training in engineering and architecture to produce music that had the ability to both unnerve and enrapture his audiences. Motivated by his intense study of many scientific disciplines, he employed the mathematical rules of the natural world to test the traditional rules of counterpoint and harmony, and to explore the spatial texture of sound, colour and architecture. The Romanian-born Greek-French composer transformed twentieth century classical music for decades to come, leaving behind an undeniable legacy that continues to inspire and even shock listeners to this day.
By approaching Xenakis?s creative output from a variety of perspectives, the contributors to this edited volume seek not only to situate Xenakis?s music within a larger cultural, social and political context but also to shed light on contemporary issues surrounding his work. Each chapter focuses on a different aspect of Xenakis?s music (in the context of particular works) and musical philosophy: mathematical, structural, performative, as well as the genesis of his compositional style and distinctive sound. Xenakis?s artistic presence on the contemporary music scene, his political influence during the tumultuous protests in Paris ?68, and his first piano composition, Herma, are also explored in-depth providing new insights into the life and work of this avant-garde figure.
This book will appeal to contemporary music researchers, students and scholars and may also be of interest to artists, performers and composers, alike.


- Part I: Xenakis and the avant-garde

Chapter one. Alannah Halay and Michael D. Atkinson: ?Xenakis, not Gounod?: Xenakis, the Avant Garde, and May ?68.