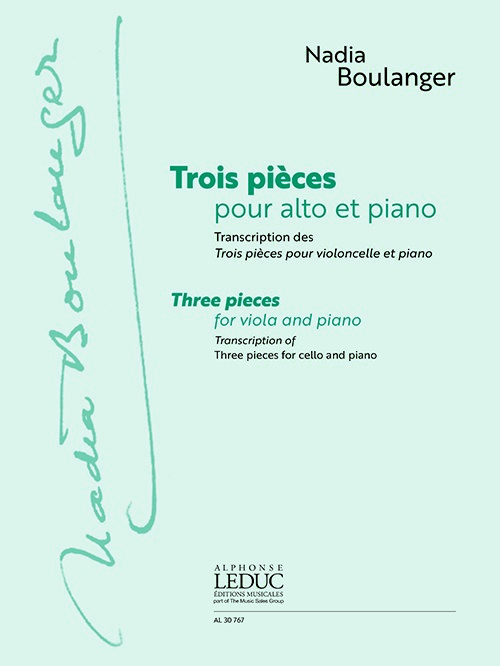 Nadia Boulanger's Three Pieces for Viola and Piano Posterity has retained of Nadia Boulanger only her gifts as a virtuoso of the piano and organ, her skill as a conductor (of vocal ensemble and orchestra) and most of all, her incredible charisma as a teacher. For nearly sixty years, "Mademoiselle" made the most of her famous Wednesdays, bringing rigour and passion to the training of several generations of musicians: among so many others, Aaron Copland, Leonard Bernstein, Igor Markevitch, Michel Legrand, Witold Lutoslawski, Astor Piazzolla, Quincy Jones and John-Eliot Gardiner have all kept unforgettable memories of these times. Was Nadia Boulanger wrong to let teaching music take precedence over her composing, as Gabriel Fauré, the great master she venerated, believed? The publication of Three Pieces for Viola and Piano, raises the question. This transcription of Three Pieces for cello and piano was composed between 1911 and 1913 and published by Heugel. The two initial pieces were originally written for organ: the first, in E flat minor, brings a moderate tempo to a melancholy cantilena with Romantic accents, while the second, in A minor, exudes warmth and tenderness. The third piece (C sharp minor), most likely originally titled Danse espagnole, heralds the Roaring Twenties with its restlessness and festive crackle. Together they emit a charm that is difficult to resist.