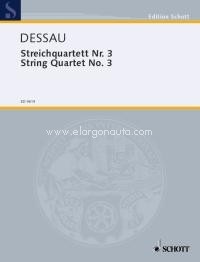 String Quartet No. 3, score and parts

Paul Dessau described his Third String Quartet, begun at Laguna Beach near Los Angeles in 1943, as predominantly lyrical. The song-like, melodious main theme of this one-movement work emerges from a series of notes grounded in tonality. A contrapuntally separated little semiquaver figure acquires increasing importance and points the way ahead to the greater rhythmical turbulence of the middle section. Syncopated imitative devices add intensity to the music until all this activity is calmed down again in the extended Coda. By working names into his music as quotations Dessau pays musical homage to two of his aesthetic forefathers - Bach and Schoenberg - during a creative period spent in exile.