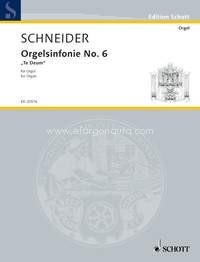 With his organ symphonies, the composer Enjott Schneider (born 1950) from Munich has been a profound sensation in recent years and seen world premieres at major European organ events. The Organ Symphony No. 6 'Te Deum' (premiered at Bruckner's St. Florian above Bruckner's tomb in 2008 and recorded there on CD) adopts the five-part structure and several motifs from Bruckner's 'Te Deum', thus becoming a forceful compact work pervaded by the Gotteslob. 1: 'Te Deum' is based on Bruckner's original figuration of fifths and eighths which is connected with the Latin Te Deum; 2: 'Te Ergo' is a 'preghiera' with pleading and praying gestures; 3: 'Aeterna fac' is an extremely virtuoso perpetuum mobile; 4: 'Salvum Fac' a basso ostinato and finally 5: 'In te, Domine speravi' a toccata which, after taking many detours, inevitably leads to the C major.