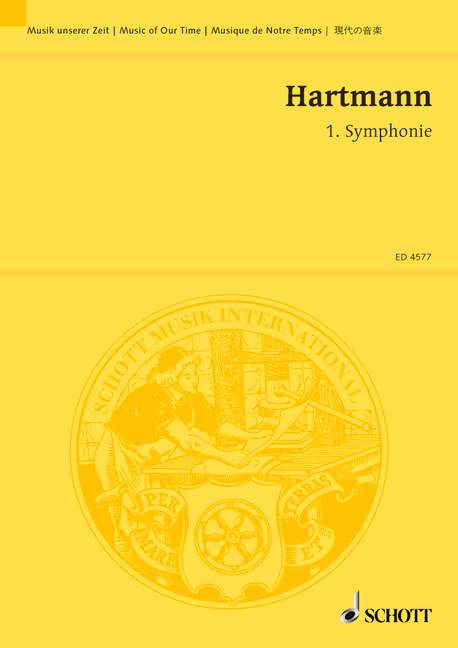 Karl Amadeus Hartmann wrote his first symphony in 1935/36. At that time he was still an unknown musician whose works stood no chance of being performed and who could not hope to find encouragement in his native Germany. He had to wait more than ten years for its first performance, which finally took place in Frankfurt in the spring of 1948 under the direction of Winfried Zillig. I was 21 at the time, and the work left an extraordinarily deep impression on me, an impression that marked the beginning of myadmiration for Hartmann's music and its very special kind of intellectuality, which struck me as both important and significant: by this I mean its spontaneous and unrefracted immediacy, its honesty and straightforwardness - qualities that extend beyond this composer's works and affect his whole surroundings, including his fellow human beings. All Hartmann's works, moreover, contain an essential element of the art of compostion, namely, an exact correspondence between the artist's insistent need to express himself and the instrumental resources that he chooses. A superficial listener might perhaps fail to notice at first that the huge orchestral apparatus that Hartmann conjures up exactly matches his powerful expressivity and the colourful nature of his rhetoric. There is also the expansiveness and physically charged vitality of the native of southern Germany, a man capable of combining his own sense of inwardness with the beauty of the moment and a feeling of hymnic grandeur. It is a combination that reflects his own south German countryside and that answers a need to communicate sustained by his own unwavering faith in humanity.- Hans Werner Henze, in: Hartmann: Kleine Schriften