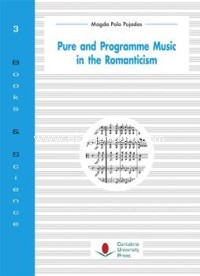 Pure and Programme Music in the Romanticism

One of the most difficult challenges a music theoretician faces, be it historically, philosophically or in other aspects, is that of correctly and precisely framing the meaning that music has in a specific moment: deducing the "why" and revealing the secret hidden within. The book "Pure and Programme Music in the Romanticism", a rigorous and indispensable study to understand music in the period in which music as an expression of feelings, begins to reach the threshold of the sublime, primarily focusing attention on what pure and programme music represent. Both types of music are instrumental, but the difference between them is that the first one, pure music, exists on its own, and for its own sake, establishing an iron-clad alliance with the form. Programme music is inspired by other forms of artistic expression, especially literature, and is indelibly linked with the content. However, halfway between these two types of music, a new one is born: absolute music. This music is the result from the dialectic established between the pure and programme, exactly in the middle of two opposing philosophies, that of Idealism and that of Materialism. All of this context described in this book is what defines the essence of Romantic music but also what allows us to understand the music of the twentieth century and that of today, because the controversy between pure music and programme music has represented, in the history of western musical thought, the turning point that led to the creation of the Gesamtkunstwerk (Total Work of Art) and the relationship between music and film, for example, as well as other artistic expressions.